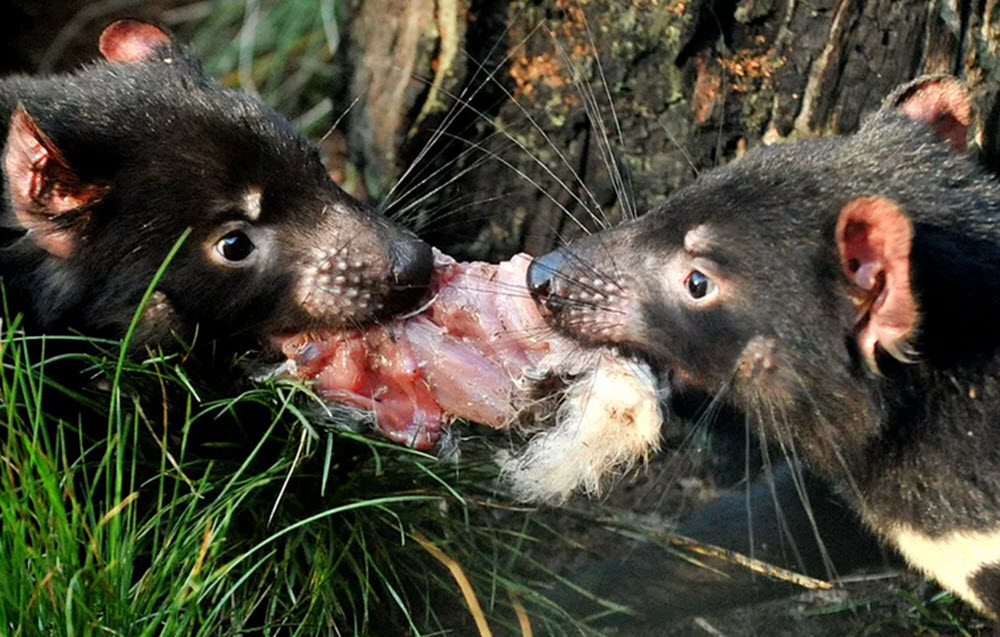 The Tasmanian devil (Sarcophilus harrisii) is a carnivorous marsupial native to Australia. Nowadays, it is only found in the island state of Tasmania, but it used to inhabit mainland Australia as well.

A bounty scheme to remove the devil from rural properties in Tasmania was introduced in 1830, and over the next 100 years, trapping and poisoning brought them to the brink of extinction. Today, the devil is protected by law and has become an iconic symbol of Tasmania. Many organisations and products associated with Tasmania feature the devil in their symbols and logos, and the devil is also an important attractor of tourists to Tasmania. Since 2013, the Australian government has been sending devils to approved zoos around the world as a par of the Save the Tasmanian Devil Program.

Short facts about the Tasmanian devil

The Tasmanian devils are generally regarded as solitary animals, but devils have been spotted eating together and defecating in a communal location.

The IUCN 3.1 lists the Tasmanian devil as Endangered.

The major threat to the survival of the species is a transmissible cancer known as devil facial tumour disease (DFTD). You can find more information about it farther down on this page.

Being hit by cars and other motor vehicles on the roads is another notable issue for the population, especially since the presence of roadkill lures the carrion-eating devils onto the road where they too end up as roadkill. 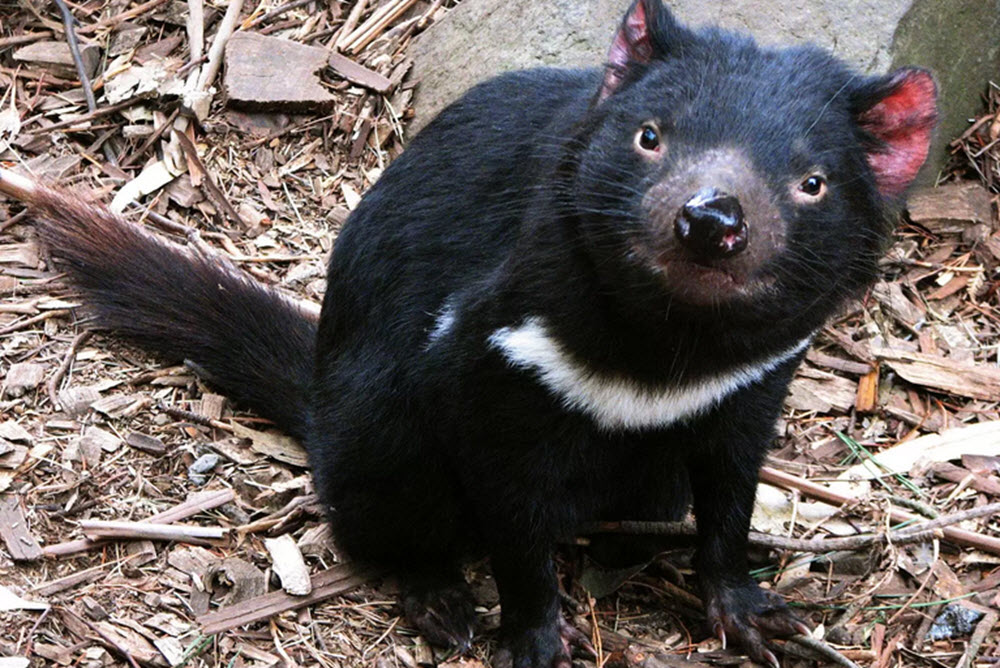 The first European settlers in Tasmania hunted the devil for food.

As livestock raising was established in Tasmania, the devil was hunted to prevent it from killing livestock. (Although their threat to livestock has later proven to be greatly overestimated. Among other things, they were given the blame for deaths caused by other predators, including feral dogs.)

Pelt hunters also wanted the devils dead; not to harvest their pelts, but because they were percieved as a treat to the possums and wallabies that were hunted for their fur.

In 1830, a bounty scheme was introduced, and during the following 100 years the Tasmanian devil population was reduced to the brink of extinction, mainly through trapping and poisoning.

In 1941, the Tasmanian devil became protected by law. Yet, permits to capture or poison devils were sometimes issued by the authorities from the 1950s and onward as a respons to complaints of livestock damage.

The devil population grew significantly in the early 1970s but then dropped again, possibly due to a lack of food.

The policy of issuing of control permits were ended in the 1990s, but illegal killings are believed to still take place. In the mid-1990s, an estimated 10,000 devils were killed each year.

Nowadays, the devil facial tumour disease (DFTD) is the main threat to the survival of the species, and selective culling programs have been put in place to remove infected individuals in an attempt to halt the spread of the illness. For more information about DFTD, see below.

Exactly when the Tasmanian devil dissappeared from mainland Australia remains unclear, but it was not recently. Evidence indicate that as early as 3,000 years ago, the mainland population had shrunk to just three fairly small groups.

Why the devils dissappeared from the mainland is unknown, but dingoes might have played a crucial role. (There were no dingoes in Tasmania.)

A devil tooth found in Western Australia has been dated to 430 years ago, but exactly how it ended up there remains unclear and there is no other evidence available that supports the theory that devil’s lived on the mainland this recently.

Since the late 1990s, the survival of the wild devil population has been threatend by the devil facial tumour disease (DFTD). This an aggressive non-viral cancer that is believed to be spread through direct contact, especially when animals fight or eat diseased individuals.

In high-density populations, a close to 100% mortality within 12-18 months is not unusual once the disease gets a foothold.

The first photograph of an infected individual is from 1996. Ten years alter, the wild devil population had dwindled by 95%.

Among the surviving devils, females have started breeding earlier in their life, which typically means they get at least one chance to breed before they die from the disease.

Also, natural immunity against the disease is more common in the surviving populations. Genes for DFTD immunity have increased in frequency due to natural selection, as individuals with these genes have been more successful at reproducing and raising young that in turn survive long enough to raise offspring.

Comments Off on Tasmanian devil