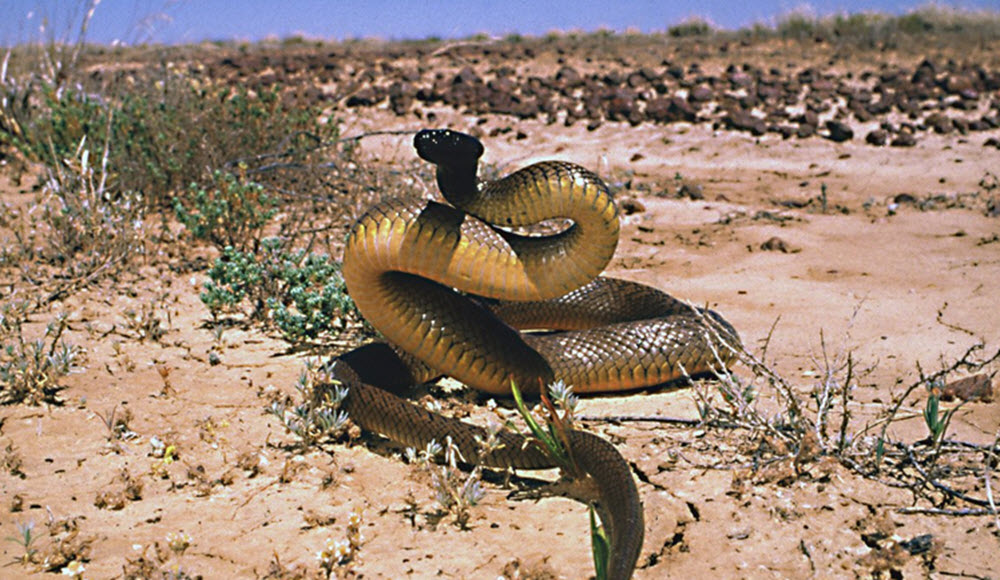 With a murine LD 50 value of 0.025 mg/kg subcutaneous for mice, the Inland taipan (Oxyuranus microlepidotus) produces one of the strongest venoms of all snakes. Based on studies done on mice, it is – drop for drop – the most toxic venom produced by any snake, even stronger than sea snake venom. It is also the most toxic of any reptile venom tested on human heart cell culture.

In a single bite, the Inland taipan can deliver enough venom to kill at least 100 adult men. Death can occur quickly after a bite, sometimes wihtin 30-45 minutes without treatment.

Fortunatelly, it is very unusual for humans to be bitten by Inland taipans. This is due to several reason:

Leaving this snake alone is strongly recommended, because if it wants to strike it is very likely to succeed, since it is extremely fast and agile. It can strike with extreme accuracy and (unlike some other venomous snakes) it will almost always inject venom into the bite wound instead of just biting you.

The Inland taipan is listed as Least Concern by IUCN 3.1.

Like all other native Australian snakes, it is protected by law in Australia.

Where does this snake live?

The Inland taipan lives on the semi-arid black-soil plains where the border regions of Queensland and South Australia converge.

What does the Inland taipan eat?

When hunting, the Inland taipan attacks its victim with a series of rapid strikes. Up to eight venomous bites in a single attack is not unusual. The snake may hold the prey with its body while injecting venom deep into the body of the unfortunate animal. The venom acts very quickly.

More info about the venom

Is there an antivenom?

The CSL Ltd Taipan antivenom is effective against both Coastal and Inland taipan bites, although it is more effective against Costal bites than Inland bites. Yet, in all reported cases of Inland taipan bites where antivenom as been administered fairly soon after the snake bite, the patient has survived. Even with the prompt administration of antivenom, however, the recovery time can be long and difficult.

In cases where the snake species remains unknown or unclear, an Australian polyvalent (broad spectrum) antivenom can be administered instead.

The CSL Ltd Taipan antivenom is manufactured by the Australian Reptile Park and the Commonwealth Serum Laboratories in Melbourne.

Comments Off on Inland taipan