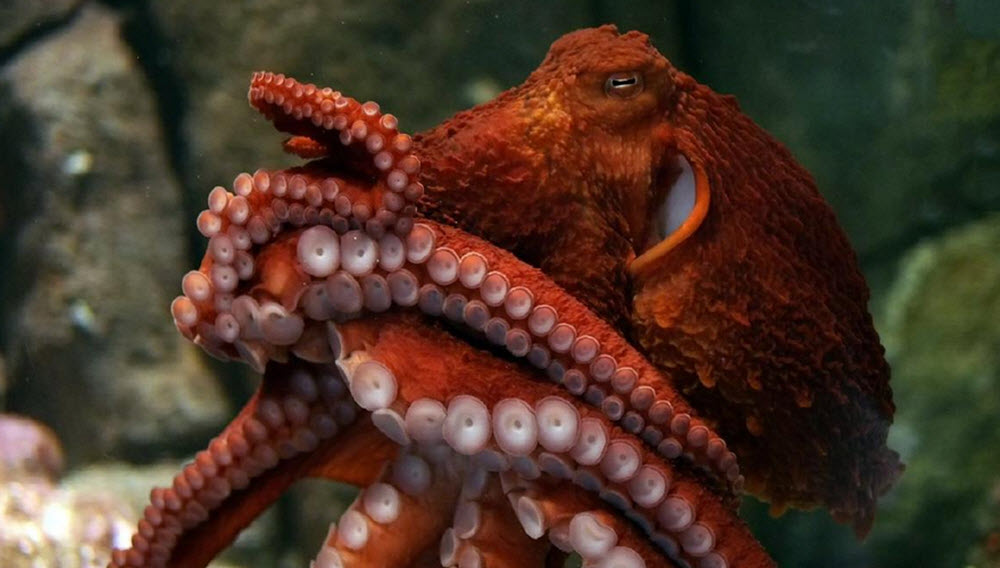 The world’s largest octopus is Enteroctopus dofleini, known in English as the Giant Pacific octopus.

Guiness World Records lists the largest specimen at 136 kg, with an arm span of 9.8 meters. Unconfirmed reports talk about individuals growing much bigger than this, including one report of an octopus that weighed 272 kg.

Most adults will remain significantly smaller than this, around 33 lbs (15 kg) and with an armspan of less than 4.5 meters (15 ft).

Where does the Giant Pacific octopus live?

The Giant Pacific octopus lives in the northern Pacific Ocean.

Off the mainland of North America, it can be found from the coast of California and northward, all the way up to and including the coast of Alaska. Off the coast of East Asia, it is reported from Russia in the north down to Japan and the Korean Peninsula in the south.

The Giant Pacific octopus is best adapted to cold, oxygen-rich water. It can be found from the surface and down to at least 2,000 meters.

How fast is the Giant Pacific octopus?

The octupus and reach speeds of up to 40 km/h in water, but only for short sprints. It achieves this through a type of jet propultion, where it pulls water into the mantle and ejects it forcefully through the siphon.

Most of the time, the octopus uses its arms to crawl along the bottom instead of moving through jet propulsion.

Examples of things that the Giant Pacific octopus eats:

It will hold the prey with its suckers and bite into it using this “beak” (rostrum). Two salivary glands are producing a paralytic and digestive toxin that will both paralyse the prey and help break it down.

In 2012, a Giant Pacific octopus was caught on camera attacking, drowning and eating a seagull off the coast of Victoria, BC in Canada.

Does it have any enemies?

The Giant Pacific octopus can expel ink in an effort to escape from predators.

Giant Pacific octopuses are among the smartest invertebrates. When kept in captivity, they are known to figure out how to open tank valves, dismantle aquarium equipment, etc. They can solve simple puzzles, use tools and open childproof containers.

These octopuses can also learn to recognize specific humans, e.g. the person or persons who normally feed them. When they recognize a person, they can react by jetting water or charing body texture.

Some researchers have reported that their octopuses are engaging in motor play.

The Giant Pacific octopus is not currently under the protection of Convention on International Trade in Endangered Species of Wild Fauna and Flora or evaluated in the IUCN Red List.

Comments Off on Giant Pacific octopus