The tardigrades – also known as waterbears and moss piglets – are a phylum of aquatic microanimals belonging to the classes Eutardigrada, Heterotardigrada and Mesotardigrada. Roughly 1,150 species have been scientifically described.

Tardigrades are extremely resilient and adaptable, and they are one of very few groups that have survived through all of Earth’s five mass extinctions. The phylum Tardigrada includes fossils dated to 530 million years ago (Cambrian period). In our time, tardigrades brought on space missions have proven their capacity for surviving outside the Earth’s protective athmosphere; at least short-term.

Here on our own planet, tardigrades are found in a wide range of enviroments, and they fill an important nische by being pioneer species that quickly inhabit new developing habitats.

Researchers have found tardigrades living in very taxing enviroments, such as:

They are found in a lot of less extreme habitats as well, such as the ocean, lakes, ponds, meadows, leaf litter, soil, moss beds, and among lichens. They are most common in wet or moist enviroments.

Waterbears are remarkably resilient and adaptable and have been discovered living in a wide range of environments, from the deep sea to mountaintops. They can handle the heat of mud volcanoes and the cold of Antarctica, and are also capable of surviving exposure to extreme pressures, air deprivation, radiation, dehydration, and starvation.

Because of their resilience, they have been brought on space missions and they have proven their ability to survive even exposure to outer space.

When tardigrades are exposed to very low temperatures, they reduce their water content from circa 85% water to just 3%. Without this severe dehydration, it would be more difficult for them to survive, since ice take up more space than water, and water inside the body that goes from fluid to frozen could case the tardigrade to “explode”.

Compared to other animals, including humans, tardigrades can survive extreme doses of raditation. Around 5-10 Gy (of gamma rays or heavy ions) could be fatal to a human, but for hydrated tardigrades the median lethal doses are 5,000 Gy for gamma rays and 6,200 Gy of heavy ions.

Tardigrades are highly capable when it comes to quickly repairing damage to their DNA caused by raditation. 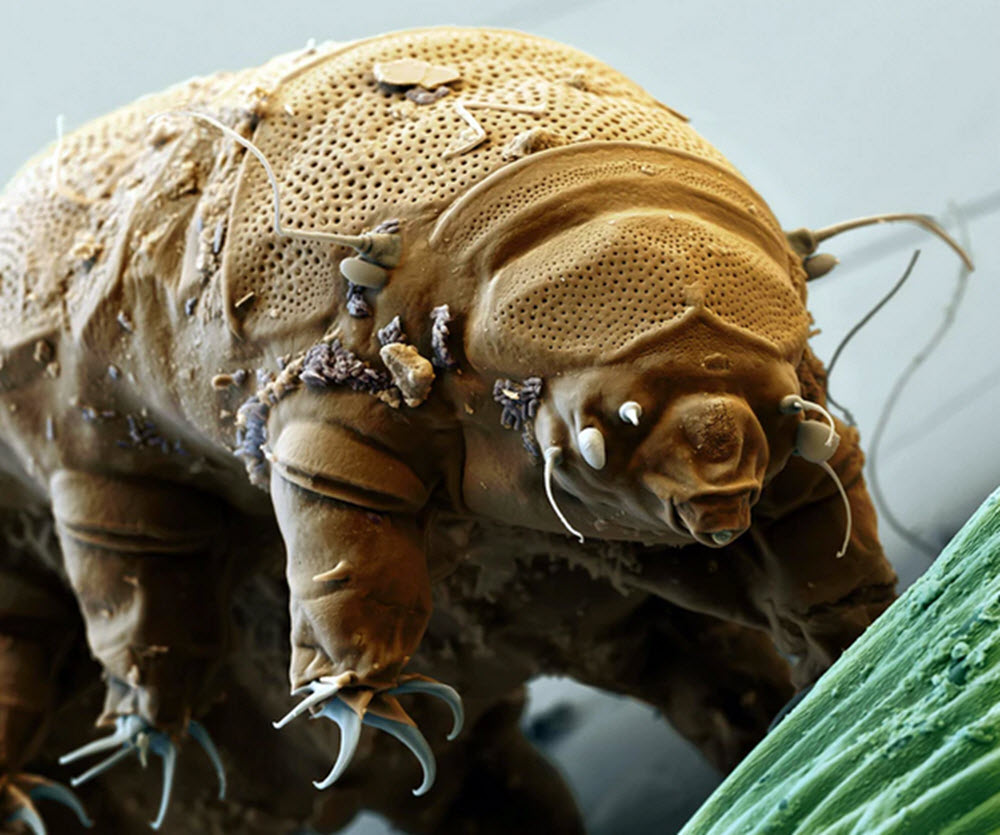 They survive in conditions that are horrible even by tardigrade standards, these amazing animals can enter a kind of super-dormant state. When they are provided with better conditions and water again, they hydrate and start foraging for food. They can even reproduce after such a long period of dormancy.

Tardigrades can suspend their metabolism down to less than 0.01% of normal metabolism and survive in a hydrated state for several years – and in exceptional cases for many years. Some tardigrades have woken up again after being severely dehydrated and without food and water for over 30 years.

Exactly how the tardigrade enters this dormant state varies: it can be via cryobiosis, osmobiosis, anhydrobiosis, or anoxybiosis. While dormant, the animal’s water content can drop to 1% of normal. Recent research indicate that the tardigrades make use of a unique type of disordered protein that replaces water in the cells.

Notably, a 120-year-old tardigraded found in dry moss did show some leg movement after being hydrated. However, this doesn’t really count as “surviving”.

Tardigrades are the first known animal to survive without any protection outside in space.

Tardigrades have survived for ten days exposed to both the vacuum of open space and the immensely strong solar raditation that exists outside the ozon layer. In September 2007, dehydrated tardigrades were taken into low Earth orbit onboard the FOTON-M3 mission. For ten days, they were exposedto the hard vacuum. Some were protected from high-energy UV radition and some were not. After being taken back to Earth, both groups were rehydrated.

Waterbears on the International Space Station

In May 2011, STS-134 (the final flight of Space Shuttle Endevour) delivered tardigrades to the International Space Station. Research carried out on these animals showed that microgravity and cosmic radiation did not significantly impact the survival of the tardigrades in flight.

All adult tardigrades of the same species have the same amount of cells. This is known as eutely.

When the young tardigrade hatches from the egg, it already have the rigt number of cells. Growing to adult size will therefore only involve enlarging the individual cells.

Some species of tardigrades only defecate when they molt. They simply leave their feces behind with the shed cuticle.

Some species of tardigrades are parthenogenic.

The tardigrades were first observed by the German zoologist Johann August Ephraim Goeze in 1772. He called them kleinen Wasserbärs (small water bears) since their gait reminded him of bears.

The name Tardigrada means “slow steppers” in Latin. This name was invented by the Italian biologist Lazzaro Spallanzani in 1777.

Depending on species, a tardigrade can have anything from circa 75 to 800 megabase pairs of DNA.

The species Ramazzottius varieornatus, which is very stress tolerant even by tardigrade standards, had its genome sequenced in 2015, and the researchers found evidence of a loss of gene pathways that are known to promote damage due to stress. This analysis also found a high expression of Damage suppressors (Dsup), a type of Tardigrade-unique proteins that protect against DNA damage from X-ray radiation. When the researchers applied Dsup to human cells in a cell culture, X-ray damage to the cells was reduced by approximately 40%.

You don’t need a very fancy microscope to see tardigrades; a low-power microscope will be enough since waterbears tend to reach a size of 0.3 – 0.5 mm as fully grown adults. They are plump and have four pair of stubby legs (i..e. eight legs in total). Each leg ends in claws or sucking disks.

The largest adults can reach a body lenght of 1.5 mm and can thus be observed with the naked eye.

The smallest adults are not even 0.1 mm in length, and newly hatched tardigrades may be smaller than 0.05 mm.

Examples of waterbears in popular culture