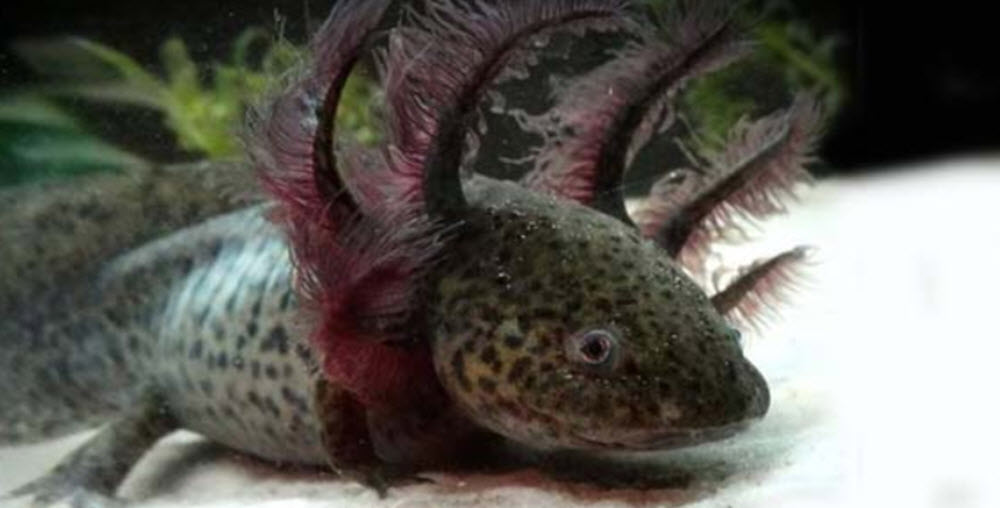 The axolotl (Ambystoma mexicanum) is a salamander native to Mexico City. Due to its very limited range, habitat destruction and the fact that it lives in a heavily polluted megacity, it is on the brink of extinction.

Once upon a time, axolotls were sold in Mexican food markets, but that is no longer the case since they have become so rare. Before the arrival of Europeans, they were a staple in the diet of Native Americans living in the city.

A survey carried out in 1998 found circa 6,000 axolotls per square kilometre in Lake Xochimilco (its only remaining habitat). When a new survey was completed ten years later, the number had dropped to just 100 individuals per km2. A four-month-long search in 2013 found no axolotls at all, but a month later two wild ones were spotted in a canal.

The name axolotl is derived from the Classical Nahuatl name āxōlōtl. Two plural forms are used in English: axolotls and axolomeh.

The species is also known as the Mexican walking fish in English, but the name is falling out of favor since its a misnomer: this is an amphibian and not a fish.

It only lives in Mexico City

The axolotl is only found in Lake Xochimilco in Mexico City. It used to inhabit Lake Chalco as well, but this lake doesn’t exist anymore as it was drained to help control flooding.

The ancient endorheic lake Xochimilco has also been changed by man, and is today rather a system of canals than a proper lake. You’ll find them in what’s today a the Borough of Xochimilco in the southern part of the metropolis Mexico City.

The water temperature in what’s left of Xochimilco rarely goes above 20 °C in the summer and can fall down to 6 °C in the winter (possibly even lower during cold spells).

It sucks food into its stomach using vacuum force

In the water, the axolotl locate food by smell and suck in worms, insects and small fish with vacuum force. The rakers interlock to close the gill slits to produce the suction.

The axolotls have barely visible vestigal teeth. (Unless it has gone through metamorphosis and developed teeth suitable for life on land.)

It doesn’t have to leave the larval stage to reproduce

The axolotl can reach sexual maturity while still remaining in its tadpole-like aquatic stage (including gills). So, instead of developing lungs and leaving the lake for a life on land, the axolotl simply stays in the water and reproduces there. This dinstinguishes the axolotl from amphibians such as frogs and toads who have to leave their tadpole stage behind, go through metamorphosis and take on their full adult form before they can reproduce.

Many members within the genus Ambystoma (to which the axolotl belong) have this ability to reproduce in the larval stage. It is believed to be a survival mechanism; an adaptation to life in aquatic enviroments where the surrounding landscape is dangerous or where there is a scarcity of food (and iodine). In its larval stage, the animal require less food and can thus survive in harsher conditions.

The adult form of the axolotl resembles the adult Mexican tiger salamander (Ambystoma velasci), but with longer toes and a few other physical differences.

It can grow back limbs

One of the axolotl’s many fascinating abilities is its capacity for growing a new limb if the old one is amputated. Also, the axolotl doesn’t heal by scarring.

Even a completely lost appendage can be regrown, but it will take several months. In some cases, axolotls have been observed regenerating even more vital structures of the body – including parts of the brain. Axolotl-specific genetic pathways may contribute to the axolotl’s ability to regenerate limbs.

Notably, the axolotl will lose quite a lot of its regenerative abilities if it goes through metamorphosis.

Sometimes, an injured axolotl will both repair the damaged limb and generate a new one; thus ending up with a spare limb.

In the lab, axolotls have readily accepted and made use of transplants from other members of their species. Transplanted eyes have for instance been restored to full functionallity. Even parts of another animal’s brain has been incorporated into the existing brain structures of the recipients.

In the Dune books, written by Frank Herbert, the Bene Tleilax society keep so called Axlotl tanks, a type of semi-artificial uteri where a human being can be reproduced from the cells of a cadaver. 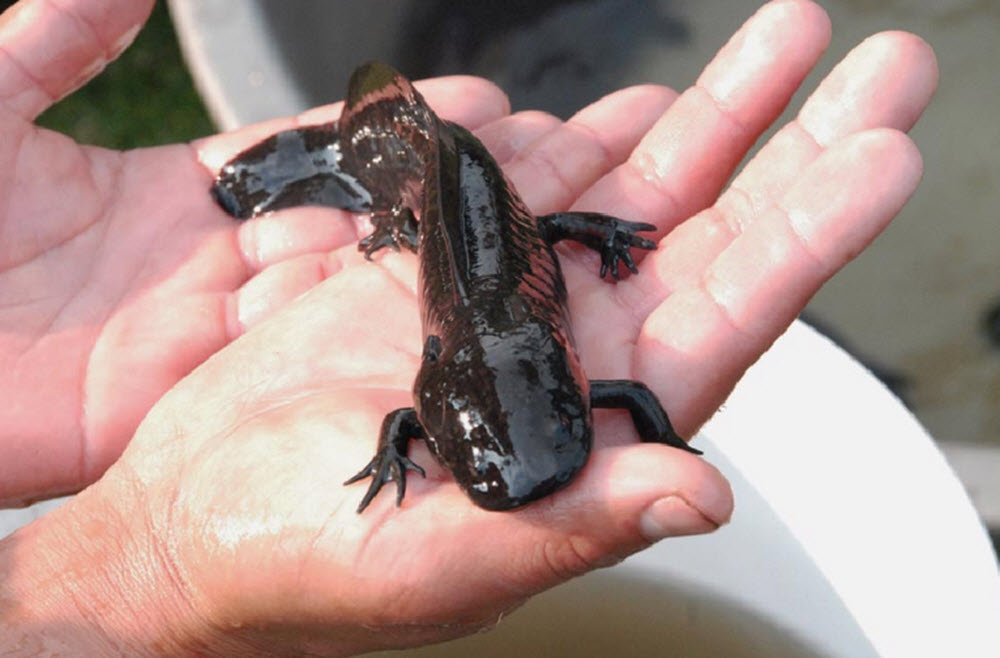 It has the longest genome of any animal sequenced so far

The base pair sequence of the axolotl’s genome was published in 2018. With its 32 billion base pair, it remains the largest animal genome sequenced so far. The axolotl genome is roughly ten times larger than the human genome, but it encodes a similar number of proteins.

During the sequencing, researchers discovered axolotl-specific genetic pathways that may contribute to the axolotl’s ability to regenerate limbs.

It is on the brink of extinction in the wild

The axolotl is listed as Critically Endangered by IUCN 3.1. This is the most serious level of threatened; above both Volnurable and Endangered. If the current trend continues, the axolotl will soon be listed as Extinct in the Wild.

The accelerating impact of Mexico City’s urban growth is a threat to the axolotl, even though the area where it lives was declared a biological reserve by the Mexican government in 1984. Since 1987, the area has been a part of a UNESCO World Heritage Site.

The axolotls live within the Xochimilco Ecological Park and Plant Market, which is a 215 hectare nature reserve and park (the second-largest park in Mexico City) inaugurated in 1993. Regretably, this ecological park is still plagued by serious enviromental problems. Among other things, the water is contaminated by both sewage and household garbage, and invasive fish species – such as Asian carp and African tilapia – are eating the young axolotls and also reducing the amount of food available to the surviving axolotls.

Illegal human settlements within the protected area is another a major issue. Many households living illegally within the park have organized to put political pressure on politicans and city authorities to let them stay, with mixed results. The UNESCO standpoint is that all squaters should be evicted, but the city borough has declared that this is an unfeasable goal.

The axolotl is a popular exotic pet, and it is also bred in captivity to be used as a model organism in scientific research. Compared to other salamanders in the family it is very easy to breed in captivity, and large numbers are reared in captivity each year.

Comments Off on Axolotl