The mummichog (Fundulus heteroclitus) is a small killifish famous for its hardiness and adaptability. Heteroclitus means irregular or unusual.

A few examples of why the mummichogs are amazing

Unlike most other species of fish, the adult mummichog can survive when the oxygen level in the water is as low as 1 mg/L. To handle such conditions, they breath in the surface layer of water, since that layer tend to be the oxygen richest due to its contact with the air.

Mummichogs can also breathe air directly, and this is why they can survive for several hours outside of water if the air is moist. If a mummichog is caught in a drying tidal pool between spring tides, it will try to burry itself to survive until the water returns. If it can’t bury itself, it will actually travel on land to get back to sea. (It can only travel a short distance.)

When it comes to salinity, the mummuchog can live in a wide range of salinity levels, and it is also capable of handling rapid changes.

Mummichog larvae can grow in salinities from 0.4 to 100 parts per thousand. (Most of the ocean has a salinity of around 35 ppt, so 100 ppt is very salty. In the famously salty Red Sea, the salinity doesn’t go much above 40 ppt.)

Mummichogs are incredibly resilient to many forms of pollution and have been found living in heavily poluted waters and ecosystems.

Certain populations have developed an eleveted resilience to dioxins, polyaromatic hydrocarbons, polychlorinated biphenyl, kepone, and/or methylmercury. In one study1, mummichogs living in the heavily populted waters in eastern United States turned out to have had 20% of their genes modified compared to populations living at cleaner sites.

Not a picky eater

When it comes to diet, the mummichog is an omnivore that can make use of a wide variety of food types. Scientific analysis of the stomach content of captured mummichogs have yielded everything from eelgrass and diatomes to crustaceans, molluscs, insect larvae, fish eggs, and very small fish. 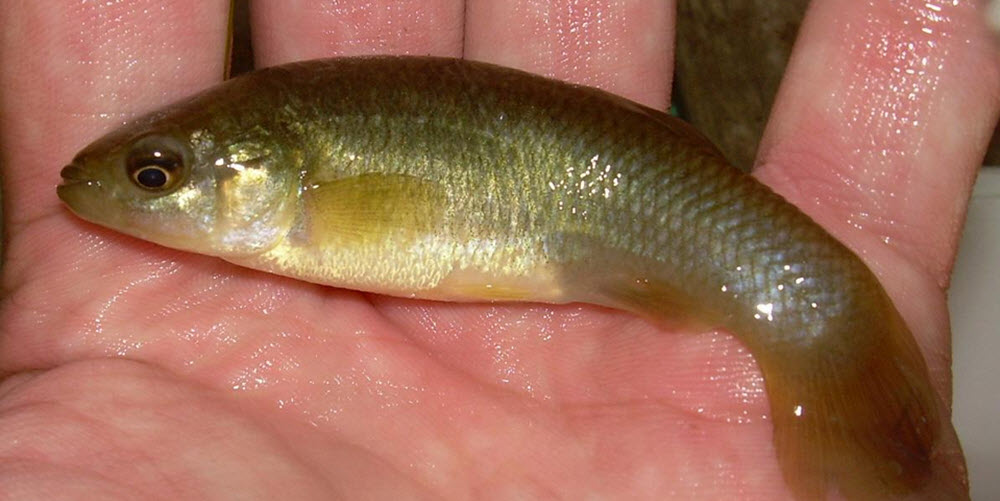 Since the mummichog is so hardy and adaptable, it has been used for many different research projects, including physiological, embryological, toxicological, and evolutionary studies. Among other things, mummichogs are used for cancer research, endocrinology research and for the study of circadian rhythms.

The first fish in outer space

In 1973, the mummichog became the first fish sent to outer space, as it travelled as a part of the Skylab 3 mission. (Skylab was the first space station launched and operated by NASA.)

The mummichogs lived in a plastic bag aquarium onboard the space station. When first exposed to the absence of gravity, the fish exhibited unsual swimming patterns – they constantly pitched forward and swam in tight circles. Eventually, however, they adapted to life in zero gravity, and by day 22 of the mission they were swimming normally.

50 mumminchog eggs had been brought with the space station, and 48 of them hatched in outer space. The hatchlings swam normally.

Mummichogs were a part of the 1975 Apollo-Soyuz Test Project, the first joint United States – Soviet Union space flight. One of the experiments performed during the mission was embryologist Jane Oppenheimer’s study of the effects of weightlessness on fish eggs at various stages of development.

The biological package onboard the Bion 3 satellite included 1,000 mummichog embryos.

The mummichog’s remarkable resilience to many toxins means that it is sometimes the only fish species found in severely polluted and oxygen-deprived waters. This has for instance been the case in the rivers Elizabeth River in Virginia, USA and the Hackensack River in New Jersey, USA. Mummichogs also manage to survive in the Staten Island Sound, a major navigational channel of the Port of New York and New Jersey.

Of course, surviving and thriving are two different things – even for the sturdy mummichog. In a 2008 study by researchers at the Virginia Institute of Marine Science, 38% of studied mummichogs from Elizabeth River had cancerous lesions, and over 50% of the mummuchogs displayed pre-cancerous lesions. The main cause of the lesions were believed to be the high levels of polycyclic aromatic hydrocarbons in the river.

Since the mummichog can survive in many different environments and happily eats mosquito, it is being investigated for its ability to function as a biological way of reducing mosquitoe populations.

The type specimen, collected near Charleston in South Carolina, was described by Carl Linnaeus in 1766.

There are two subspecies of Fundulus heteroclitus:

The two subspecies differ from each other both in appearance and behaviour. The northern subspecies deposit its eggs in the sand, and the eggs have adhesive filaments. The eggs of the southern subspecies lack such filaments and are usually deposited inside empty mussel shelles.

F. heteroclitus is listed as Least Concern by IUCN.

Notably, the mumminchog is not actually a type of minnow since it doesn’t belong to the Cyprinidae family.

The name Mumminchog comes from the Narragansett language, a Nativa American language belonging to the Algoquian language family. In Narragansett, mumminchog means “going in crowds” (mumminchogs live in shoals).

Where do the mummichogs live?

Notably, mumminchogs live on Sable Island in Canada, even though this island is located 175 km away from the closest mainland.

Mummichogs inhabit brackish and coastal waters, including salt marshes and estuaries where their ability to survive in fluctuating salinity levels come in very handy. Also, shallow waters are more prone to temperature fluctuations, which is probably why the mummichogs have developed to handle such fluctuations well and can survive within an unusually big temperature span.

Mummichogs live in a wide variety of environments, from salt marshes, estauaries and tidal channels to eelgrass beds, cordgrass beds, and sheltered parts of the shoreline. In coastal rivers and creeks, it rarely ventures beyond the head of tide.

The mummichogs often swim near muddy bottoms. The genus name Fundulus is derived from this; fundus is the Latin word for bottom.

The mummichog has been introduced to European waters, and established populations exist on the Iberian Peninsula. From there, some mumminchogs have reached the Mediterranean basin.

Since the mumminchog is a popular baitfish, it is sometimes inadvertedly released by anglers. Individual specimens believed to have escaped in this fashion have been reported from ponds in New Hampshire, the upper Ohio River, and the Beaver River in Pennsylvania. The mummichog can easily adapt to life in freshwater.

Colour: Olive-brown to olive-green. The exact coloration is variable, and the same individual can look very different in different environments. Males display more intense colours during the reproductive season, and the sides can become steel-blue with silvery bars while the underside sports yellow and organge-yellow colours.